Though they were fathered by Achilles and Odysseus in the final week of Achilles' life, cousins Atalanta and Ariadne were born into slavery on the island of Lesbos.  They have never known anything but a life of drudgery, and have nothing and no one to depend on but each other.  Learning that their master may be planning to part them from each other, they decide to escape, and end up headed towards the partially rebuilt Troy.  En route, they meet Eurysakes, son of Aias of Salamis, and with him they get caught up in an adventure that none of them could ever imagine...

This is the very lightly interactive adaptation of a novel I wrote in 2014.  The novel was the first of seven (all written in 2014) which were intended to be a Young Adult series in which the protagonists did not all pair off at the end.  I'm not sure if I'd say the final result here is at a "Young Adult" level in terms of its content or narrative style, but I think it probably remains relatively close to YA.  The novel itself is about 145k words long (counting game over scenarios, etc.) and the game also contains a glossary of mythological characters and places (as well as archaeological and cultural terms and concepts) and some post-game informational passages which add another 30k words.

And what does "lightly interactive" mean? Well, in a nutshell, there aren't that many choices to be made, and most are "do you want to read scene A or scene B?"  Except in terms of battle and the escape from slavery sequence, in which cases your choices can get our young protagonists killed.  But there's only one ending (what with this being part one of seven!) and there are very few places where your choices have any impact on events (beyond potential game over scenarios).

For those who feel they might be interested in the story without the minor level of interactivity, I have posted the non-interactive version to AO3.  You can find it here.

Chapter One of this novel was previously released as The Cousins here on itch.io, though there has been some modification of the chapter's text since then.

Non-ethnic slavery, mentions of past physical abuse, mentions of rape, implications of possible non-consensual sex (for characters other than our heroines), non-graphic depictions of violence, desecration of human remains, period-typical castration and attitudes towards same...and probably a lot of other things, too, as the Late Bronze Age was not a pleasant place.  (Nor was the Greek Heroic Age, and this is sort of a fusion between the real LBA and the mythical one...) 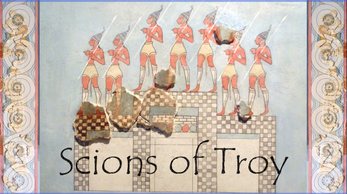 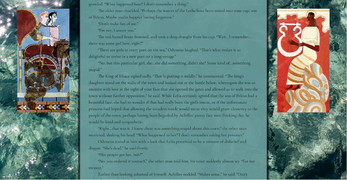 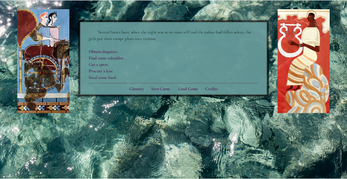 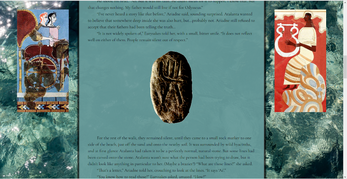 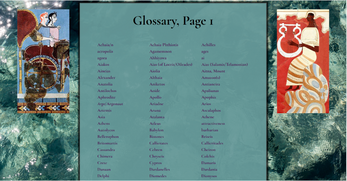